Name one thing you can’t live without?

You probably did not say Nitrogen, but it’s true! Even if we do not notice it, it’s an integral part of our lives. Nitrogen is a vital component of plant life but it is not as accessible as we would assume. Despite Nitrogen existing in its gaseous form all around us,it is the most abundant element in the atmosphere, 78% of the atmosphere is nitrogen, plants are unable to use it in this form. It is found in the air in a bonded state that cannot be broken down by the plant.

Nitrogen has the plants at gunpoint, so to speak. Plants need it to grow but too much of it can kill them, it is necessary for our food supply, but excess nitrogen can harm the environment. It is important to maintain a delicate balance of substances to sustain both plant and animal life. When plants lack nitrogen, their growth becomes stunted, and so produce smaller fruits and flowers. Farmers often use fertilizers containing nitrogen to their crops, to increase crop growth. Without nitrogen fertilizers, scientists estimate that we would lose up to one third of the crops we rely on for food and other types of agriculture. But we need to know how much nitrogen is necessary for plant growth, because too much can pollute waterways, hurting aquatic life. 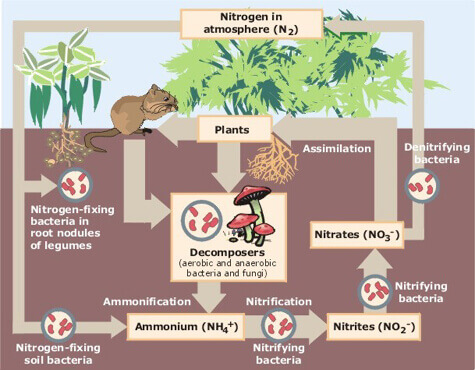 The nitrogen cycle is one that is forever in motion- nitrogen moves through both living and nonliving things: the atmosphere, soil, water, plants, animals and bacteria. In order to move through the various parts of the cycle, nitrogen has to change its form. When in the atmosphere, nitrogen exists as a gas (N2), but in the soils it exists as nitrogen oxide( NO) and nitrogen dioxide(NO2) and when used as a fertilizer, it can be found in other forms, like ammonia, NH3, that can be processed even further into different fertilizers like, ammonium nitrate, or NH4NO3.

Nitrogen usually makes its way into the water via rainwater- it reacts with the water’s hydrogen to form ammonia. The pond is writhing with good bacteria that assists with a process called Nitrification- changing ammonia into nitrites and then nitrates. This is finally a form of nitrogen that can be used by the plants( during photosynthesis).Denitrification is the process that follows converting nitrate to nitrogen gas, thus removing bioavailable nitrogen and returning it to the atmosphere as dinitrogen gas (N2), this is the ultimate end product of denitrification.

Another way Nitrates find their way into a pond is atmospheric fixation. It occurs during lightning storms when nitrogen gas is broken up, allowing it to combine with oxygen-forming nitrogen oxide which is dissolved in rainwater.

Have a project in mind? Let's talk